SCOTTSDALE, Ariz. – Given that his major at Pepperdine University was sports medicine, Jackson McClelland should have known better than to pitch through shoulder pain throughout his junior season with the Waves.

“Probably not my wisest decision,” the six-foot-five, 220-pound right-hander admits sheepishly with a grin. “But, I think any athlete would tell you the same thing – if you get asked to go out there and take the ball, you’re going to take the ball.”

Time and again McClelland did just that in his draft year, overcoming a pre-season concussion caused by a line drive to post a 2.93 ERA in 95 innings with 71 strikeouts over 15 starts in 2015, leading the Toronto Blue Jays to select him in the 15th round. By the time he got to the short-season A Vancouver Canadians that summer, he didn’t have much left, appearing in three games and working five innings before he had to pull the plug.

The diagnosis of a torn labrum jeopardized his pro ball career just as it started. But a rehab program along with a reworked delivery have helped the 24-year-old develop into an intriguing reliever who topped out at 101 m.p.h. at double-A New Hampshire this season.

“The Blue Jays basically rescued my shoulder because it was pretty tough coming out of college with all the issues I had,” says McClelland, who is pitching in the Arizona Fall League for a second straight year. “Nikki Huffman, specifically, Jose Ministral, the whole (training) staff, man, if they weren’t there, I don’t know what I would have done.”

While the rehab program took care of the pain when he pitched, it was the reworked delivery – first his arm angle with former Blue Jays pitching co-ordinator Sal Fasno, and later with single-A Dunedin pitching coach Mark Riggins – that really started to unlock McClelland’s potential.

By his own admission, his velocity was always sporadic, getting up to 97 m.p.h. while at Pepperdine but also as low as 89-90. Once he returned to action in 2016, the Blue Jays converted him to a relief role, “and all of a sudden you put him in the bullpen, tell him to blow it out for an inning and it’s upper 90s,” says John Schneider, who’s managed McClelland at three different levels of the Blue Jays system.

The turning point came in 2017 with Riggins at Dunedin, who pushed the native of Cherry Valley, Calif, to find a way to involve his legs more. Through some trial and error, they came up with a unique windup in which his stride leg wraps around his plant leg causing his body to twist so far, his jersey number is practically facing the hitter.

Unleashing the coil with his front leg creates more drive to the plate and allowed him to sit 96-99 with his fastball this year.

“I always had good arm strength, but I never really got to my legs, which is why Mark Riggins was so instrumental – I can’t overstate how big he was in my career,” says McClelland. “He saw (the velocity) in me and always told me, ‘Hey, it’s there. We’ve just got to get to it now.’”

While the revamped delivery has helped him pick up more velocity, he now has a lot of moving parts he needs to keep track off.

One particular risk is that if he opens up too quickly with his upper body, his arm can drag behind him, impacting his command. In 43.2 innings over 39 games between Dunedin and New Hampshire this year, he walked 21 batters but also struck out 57, the first time he’s been better than a strikeout per inning in his career.

“Just like everything in baseball, it’s consistency,” McClelland says of his maintaining good mechanics. “I started it last summer and this year is the first time that I was, alright, I’ve got a good feel of where everything should be, the timing, the rhythm, the consistency of it all.

“I can’t come out too soon or otherwise it’s going to be a tough day.”

McClelland had a few of those this year, posting a combined ERA of 4.33 between Dunedin and New Hampshire after putting up a 1.34 in 53.2 frames at low-A Lansing and Dunedin in 2017. But the velocity gains he’s made puts the Blue Jays in an interesting spot with McClelland, who must be added to the 40-man roster or be left exposed in the annual Rule 5 draft.

Given the growing focus on velocity in the game, McClelland could make an appealing dice roll for a team willing to bet on a big arm. And with the Blue Jays facing a severe 40-man roster crunch, they may be hard-pressed to protect him.

Those realities are something McClelland has tried not to think about too much, leaning instead on “that old saying, just focus on what you have to do every day and I’ll let everything else take care of itself.”

“Business and I, it’s not really my thing,” he adds. “I come out here and hang with the guys here and if something happens, awesome, if not, I’m with the Blue Jays and I can’t thank them enough for how much they’ve done for me.” 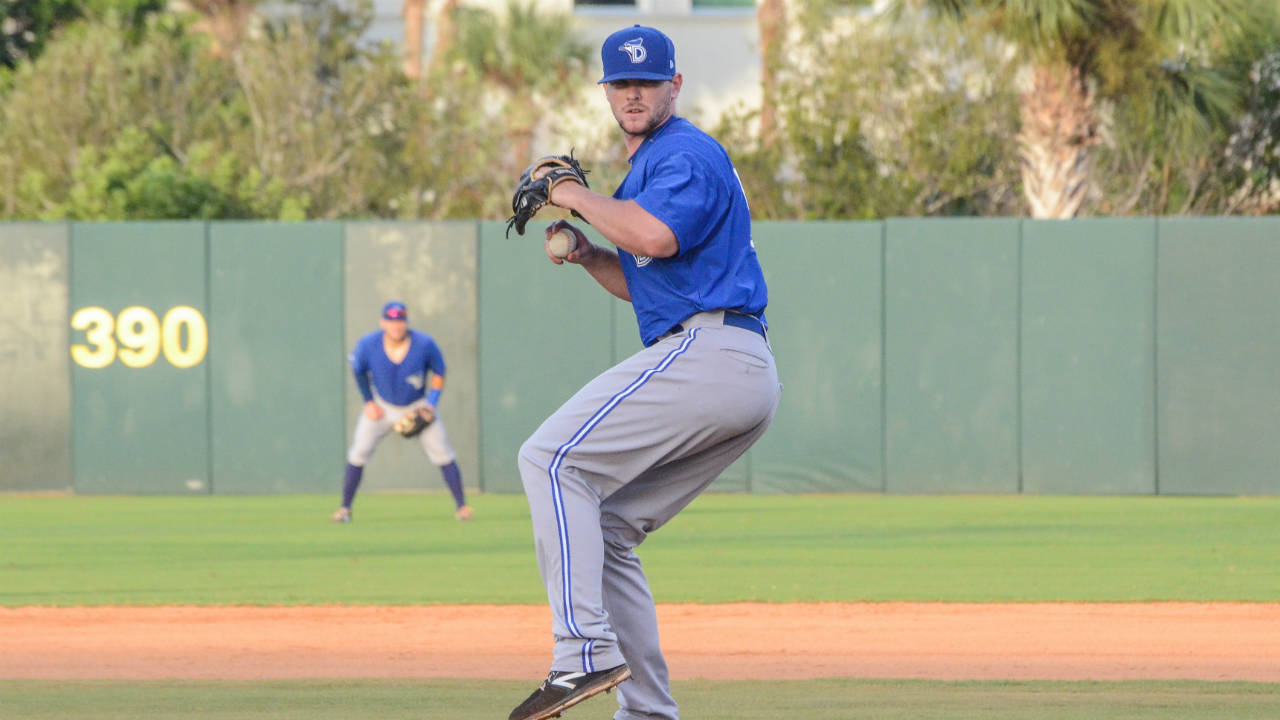 As part of his agreement when he signed out of the draft, McClelland gets to go back to school once he’s done playing to complete his degree. While pitching is obviously his primary passion, he says he “can’t get enough of” learning about the human body and how it performs in the sports realm.

“I love working with the strength coaches and the nutritionists about how we can be better, and the athletic training staff about how I can recover better, how I can be better on the field, all that stuff,” he says. “It’s interesting. I love studying it.”

To make real inroads in that regard, however, McClelland would need to not only complete his undergrad degree, but also pursue some post-graduate studies, as well, which is why he notes that “I’ve got quite a bit of schooling left once I go back.”

First, though, there’s trying to build on that velocity climb on the radar gun, and seeing how high up the baseball ladder it takes him.