TORONTO — On the morning of Nov. 17, Trent Thornton was relaxing at home with his parents in Charlotte when his phone rang. Armando Velasco, director of minor-league operations for the Houston Astros, was on the line. The 25-year-old stepped outside, heard the words “traded to the Toronto Blue Jays” and picked up little else during the conversation.

“I just blacked out,” the Pittsburgh-born, North Carolina-raised right-hander remembers with a grin. “I got off the phone and walked inside and said, ‘I just got traded to the Blue Jays,’ and was like, ‘Oh, crap, I’ve got to call him back because I don’t know what he just said.’ Then Ross Atkins called and it hit me. I was like, ‘Wow, this is kind of real.’

“I was just giddy with the new opportunity.”

A few months earlier, Hector Perez, another pitching prospect feeling stuck in a deep Astros system, had a similar experience. The day after throwing five innings of two-run ball for the double-A Corpus Chrsiti Hooks against the visiting Midland RockHounds, the 22-year-old from Santo Domingo arrived at Whataburger Field like any another day when he was quickly called in for an unplanned meeting and informed he’d just been dealt to the Blue Jays.

“Everyone was in shock,” recalls Perez, who in the days leading up to the July 31 non-waiver trade deadline figured he could be in play. “I was waiting for a trade. I knew about the (Blue Jays) roster because I love baseball and I’m always looking at things about baseball. When I got traded, I knew why they traded for me and it was really good.

“Toronto has a better opportunity for me here. It was a good thing and tough at the same time (in the Astros system). When the team has a great roster in the major-leagues, it’s tough for the minor-league players to get there. Here, they are rebuilding the team and they have a lot of opportunity for us, the young players. Let’s take the challenge and do my best and show the team I can take another level this season.”

Each week, Jeff Blair and Stephen Brunt tackle the most impactful stories in the world of sports and their intersection with popular culture. Come for the sports; stay for the storytelling and cigars.

For the Blue Jays to eventually succeed in their rebuild, they’re going to need pitching prospects like Thornton and Perez to emerge in 2019, or in the near beyond.

From a position-player perspective, they’re working from a deep pool fronted by Vladimir Guerrero Jr. and Bo Bichette, and, to a certain extent, really need to only complement that duo effectively. If they hit on a one or two of Danny Jansen, Anthony Alford, Cavan Biggio, Brandon Drury or Billy McKinney, for example, they’ll have the basis of a competitive lineup.

Their situation is far less certain on the mound, where the club’s three most established arms — Marcus Stroman, Aaron Sanchez and Ken Giles — have only two years of control remaining and will likely be trade candidates by the time this year’s trade deadline arrives.

As things stand now, Stroman and Sanchez front a rotation set to include off-season acquisitions Matt Shoemaker and Clayton Richard, plus rookie Ryan Borucki. Behind them is a group of pitchers that includes depth-arm Sam Gaviglio plus prospects Thomas Pannone and Sean Reid-Foley, each of whom appeared for the Blue Jays last season are set to give triple-A Buffalo the best reserve staff the organization has had in years.

T.J. Zeuch, Shawn Morimando, Jon Harris, Andrew Sopko, Julian Merryweather, Thornton and Perez will be among those jockeying for the remaining spots in triple-A and double-A, while the flame-throwing Nate Pearson, having missed most of 2018 due to a fractured forearm, Patrick Murphy and Yennsy Diaz will provide a constant upwards pressure. The intriguing Eric Pardinho is a little further down the line.

If the Blue Jays can’t form the nucleus of a contending pitching staff out of that group, they’ll fail to maximize Guerrero’s period of contractual control and the reboot from the highs of 2015-16 will be a much more trying and extended process. 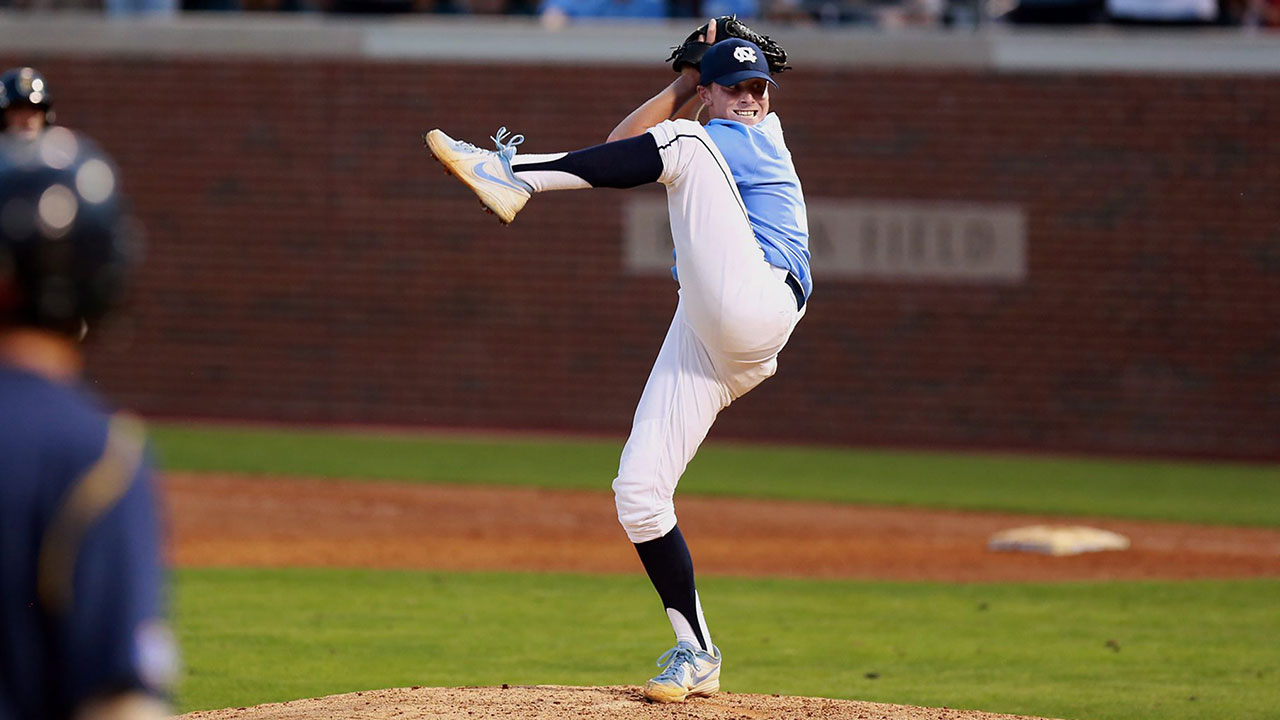 Trent Thornton winds up for a strikeout pitch. (Ted Richardson/AP)

The six-foot, 175-pound Thornton is among the arms that will arrive at spring training with a legitimate chance to break camp with the Blue Jays. The hard-throwing right-hander capped a strong 2018 with a solid showing in the Arizona Fall League and finished with incredibly good walk (2.2 per nine innings), strikeout (8.8/9) and home run (1.1/9) rates in the hitter-friendly triple-A Pacific Coast League.

There’s a lot of polish in his game.

“I was throwing quality strikes and quality balls instead of just throwing strikes,” he says of his main progress last season. “And when I was ahead in the count I was minimizing pitches to strike guys out.”

That wasn’t the case when he entered pro ball out of the University of North Carolina as a fifth-round pick by the Astros in 2015. A good freshman year as a swingman for the Tar Heels led to a strong sophomore season as a starter, but he ended up primarily closing in his junior season, and while he struck out 81 batters in 62 innings, he also walked 31, his walks-per-nine of 4.50 nearly double that of the previous year.

The swing between roles ahead of the draft weighed on him — “as soon as they started throwing my roles around it affected me mentally a little bit,” he admits — and his delivery got messed up along the way. Once he joined the Astros, they presented him with some data and video on his arm slot, extension and release point that explained some of his command issues and helped him make an adjustment he couldn’t figure out at North Carolina.

“My arm slot started getting higher and higher (in college), which is not normal for me, and as soon as I went back down, to about three-quarters, I started throwing strikes extremely consistently,” says Thornton. “My stuff went back to normal, which was awesome for me because I felt normal.”

Thornton subsequently learned to embrace all the data offered by the Astros, once he learned how to effectively identify and implement the information he deemed most relevant. Initially, he explains, “if you don’t know what you’re looking for, your head explodes, really.” As he learned to identify the way things like spin rates impacted his repertoire, he learned how to eliminate the guesswork from his self-evaluations.

“Everything the Astros do is based off statistics,” says Thornton. “They use Trackman data a lot and Rapsodo (measuring spin rate and angles) so I was looking at my spin rates on my curveball, my cutter and my fastball — all the pitches I throw. And then I was looking at all my pitches on the break chart so if I’m trying to work on a pitch and make it better, I can see if I’m going in the right direction or not, and make little tiny changes along the way.”

Perez, an athletic six-foot-three and 195 pounds with body movements that rate similarly to those of a shortstop, signed with the Astros as an 18-year-old international free agent in 2014. The native of Santo Domingo, Dominican Republic quickly made up for lost time, describing the data dump he received upon his entry to pro ball as his “university,” because “they explained all the steps about data and Trackman, Flash Motion for the hitters, and I liked that.”

While he relished all the information, his immediate challenge was — and remains — harnessing a fastball that Baseball America grades as a 70 on the 20-80 scouting scale. Last season marked some progress in that regard as his walks dropped from 78 in 107.1 innings in 2017 to 64 in 115 frames in an ’18 he finished at double-A New Hampshire, helping win an Eastern League title.

His fast-twitch athleticism probably plays a role on that front, causing him to speed up physically at times on the mound, and clearly much work remains to keep him from ending up in the bullpen. His fastball would likely play up into triple digits as a reliever, complemented by an effective splitter he throws instead of a changeup — “my changeup was really bad,” he says — but as he prepares to add a new two-seamer, there’s too much reason to keep dreaming on him as a starter.

“Being consistent with my delivery, that’s my biggest problem,” says Perez. “I struggled the last two seasons with my fastball command. It’s hard to locate when you throw hard, but I’m working hard to establish consistency with my stuff and have command where I’m throwing.”

Perez is doing that through drills, a strength program and routine catch sessions with a specific purpose to every throw, all aimed at creating the type of muscle memory needed to make gains in command.

At the same time, he continues use information with the Blue Jays in the same he did with the Astros.

“Here they provide me the same thing,” says Perez. “I like to receive all the information about my pitches, it’s really good to know how your stuff is working when you are throwing good games, and when you are backwards and improving.”

The rookie camp hosted by the Blue Jays at Rogers Centre last week marked the first time out of the United States for Thornton, who was impressed by the dome and the city. Same for Perez, who, like his fellow prospects from warmer climes, received a rude welcome by the cold snap that chilled the air with temperatures that plunged to -20 C.

Like his acclimation to weather, Perez’s initial adjustment to the Blue Jays was a bit difficult as he didn’t know anyone at New Hampshire when he got there. But he quickly adapted to his new teammates and coaches, developing a comfort and rapport that was extended during the camp.

Thornton is still getting used to things, too, although a visit to the club’s facilities in Dunedin, Fla., after the trade has helped him build comfort. And there’s now the additional motivation of seeing a path to the big leagues open up after feeling blocked for so long.

“I felt a lot of pitchers in the (Astros) organization were worthy of having an opportunity in the big leagues at some point but it’s a logjam with guys like, last year, Justin Verlander, Gerrit Cole, Lance McCullers Jr., Dallas Keuchel, Charlie Morton — five guys who are extremely experienced there and have really good stuff, some Cy Youngs,” says Thornton. “For me personally, it was in my best interests to get another opportunity elsewhere and luckily I was able to get traded.