TORONTO — Randal Grichuk’s not saying it’s a good thing he injured himself making a diving catch late last April, forcing him to miss a full month recovering. The Blue Jays outfielder would much rather have never been hurt. But he was hitting .106/.208/.227 at the time, after one of the most miserable slumps of his young major-league career. If it took a Grade 1 sprain of the PCL in his right knee for him to finally get an opportunity to sort out a kink in his swing, so be it.

“Me getting hurt was either unfortunate or fortunate, depending on how you look at it,” Grichuk said Saturday at Rogers Centre where he was taking part in Blue Jays Winter Fest. “I didn’t get a ton of reps during spring, so I knew I was going to be kind of behind people. But I didn’t think I was going to be that far behind people. My April was very, very bad.”

It was a disaster. Playing for a new team and facing new pitchers he’d never seen before, Grichuk had only seven hits over 25 games when he landed on the disabled list. Which makes it that much more impressive that he finished the season as the Blue Jays’ second-best hitter in terms of OPS (.803), wOBA (.349), and wRC+ (115) after Justin Smoak. His 2.1 WAR led all Blue Jays, and he tied for the team-lead in home runs despite having only two to his name by the beginning of June. It was a dramatic turnaround considering where his psyche was when he went down.

“A lot went into the struggles in April — so much goes into it that we don’t even realize,” Grichuk said. “The mental side is so important. That’s something that people who don’t play will never realize. You could have everything clicking at the plate but no confidence and you won’t perform.”

While Grichuk recovered, he went to Dunedin, Fla. and met up with Guillermo Martinez, then Toronto’s minor-league hitting coordinator. Martinez, who will serve as the Blue Jays’ hitting coach this season, was scheduled to fly to the Dominican Republic to work with Blue Jays prospects at the club’s complex there, but delayed his trip to stay in Dunedin and work with Grichuk for nine days straight.

After studying his swing, Martinez asked Grichuk to try standing more upright in the box in order to prevent a bad habit he’d developed of jumping out towards the pitcher. The adjustment was meant to help keep Grichuk’s swing under control, and allow him to see the ball longer in order to make better decisions about which pitches to attack. 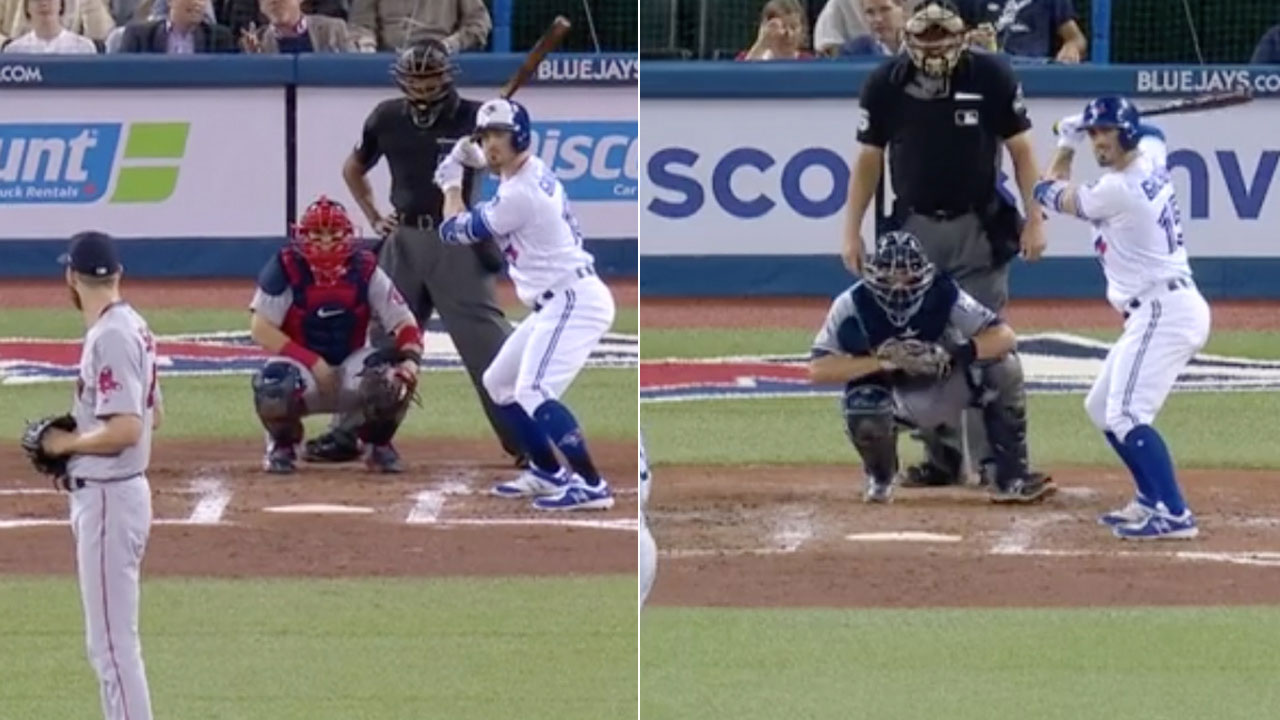 On the left, Grichuk hits during his slump in April, prior to the adjustments he made while on the disabled list. On the right, Grichuk hits in September, using a more upright batting stance.

After the month he’d suffered through, Grichuk was open to anything. And Martinez put him through the ringer. The 34-year-old developed a unique approach to batting practice during his four years as a hitting coach in the Chicago Cubs’ system, utilizing multiple pitching machines at once throwing different pitches from various heights and angles with varied velocities. When he joined the Blue Jays last year, he began implementing it across Toronto’s minor-league system.

“I’m just putting guys in a situation where they have to compete,” Martinez said. “I relate it to boxing. A boxer spars, right? He doesn’t just punch a bag. Same thing for us. We don’t just hit of a tee, we don’t just hit batting practice. You have to actually practice what you’re going to face.

“When you force guys to compete in practice, you get a lot more focus out of them. And hopefully that trends into games.”

Once he’d solidified his adjustments and recovered from his injury, Grichuk returned to the majors and looked like a different guy. He put up a .988 OPS in a torrid month of June, and ended up batting .271/.319/.553 over the remainder of the season, hitting 23 home runs in his final 97 games.

That’s more like what the Blue Jays thought they were getting in Grichuk when they acquired him from the St. Louis Cardinals last off-season. His power and exit velocity numbers have always been impressive, and part of Toronto’s thinking was that if it could take Grichuk out of St. Louis’s Busch Stadium, a poor offensive environment, and deploy him at Rogers Centre where balls tend to fly, he could have an offensive breakout.

It almost worked. Among players to make at least 450 plate appearances in 2018, Grichuk’s .257 isolated power was the 15th-highest in baseball. That was above Aaron Judge, Bryce Harper, and Giancarlo Stanton. He finished seventh in MLB with 9.5 barrels per plate appearance as measured by Baseball Savant. His average exit velocity of 90.6-m.p.h. was among the top 18 per cent of hitters across MLB.

The issue is that when you order those lists of hard-hitting players by walk rate and on-base percentage, Grichuk often ends up near the bottom. He has a 5.8 per cent walk rate for his career, and the .301 on-base percentage he finished 2018 with was actually an improvement on the numbers he posted the two seasons prior. It’s great to be able to crush hittable pitches harder and further than most. But it’s difficult to maximize that ability if you aren’t laying off the unhittable ones, too.

Last off-season, Grichuk stood in for daily repetitions against a randomized pitching machine to try to improve his discipline, and even took vision training courses in the hopes of improving his eyesight. He’s continued the work with the pitching machine this off-season, and has discovered a new remedy for his eyesight that he hopes will improve his plate vision next season.

Eye drops. Even as he tore the cover off the ball over the final four months of 2018, Grichuk battled blurred vision at the plate — an ailment that caused him to blink constantly while he hit, trying to get a clear view of the pitch. He alerted the Blue Jays to the issue late in the season, and when the club went to New York in mid-September he stopped in to see a consulting optometrist the club brings in to conduct vision tests during spring training.

The doctor told Grichuk he has chronically dry eyes, caused by an inability to produce enough tears to keep his eyes adequately lubricated. Grichuk was prescribed eye drops that quickly cleared up the dryness, and his blurred vision with it. It was a relief to Grichuk, who underwent laser eye surgery in 2012 and was worried he’d have to undergo the procedure again.

“I didn’t know what was going on — there were so many things that were running through my head,” he said. “He gives me the eye drops and I could immediately feel a big difference. I used it for the last two weeks of September and felt so much better. I didn’t have to blink as much — the ball was just clearer for longer.”

Now, before every game and every plate appearance, Grichuk will apply a couple drops and finally see clearly at the plate. He’ll carry his new upright stance forward, too, and continue to refine his plate approach with Martinez, who will be bringing his elaborate batting practice set-ups to the majors. Grichuk will try to do what he did over four months last year — just this time, over six.

“Last year was probably the longest that I’ve struggled that bad. But it was good to be able to realize, hey, my numbers weren’t where I want them to be, but they were respectable,” Grichuk said. “So, don’t panic. One bad month doesn’t make or break a season.”